This week I have been working on some terrain tiles for Frostgrave. For those who have been living in a cave or on the dark side of the moon and aren't familiar with Frostgrave it is a fantasy skirmish game set in a magically frozen sity of Felstad. Each player controls a wizard and their apprentice and a band of merry cutthroats and vicious warriors. Wizards fight to recover treasures amongst the ruins with the ultimate aim of becoming powerful enough to cast a spell that allows them to discard their mortal shell and ascend to a higher plane of consciousness. 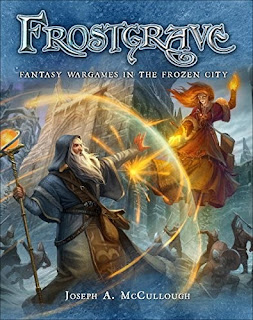 It's a fun game with some nice, if fairly rudimentary, campaign rules and myself and AGG have been thinking about playing it for a while. I have a variety of terrain pieces, a mixture of GF9 Battlefield in a Box, Pegasus Hobbies Gothic Building Sets and various Conflix pieces, plus some odds and ends from an old Mordheim campaign that I will re-use. I've also been painting up some of my 28/32mm Fantasy figures in preparation, including this 30 year old Citadel Winged Fire Demon. 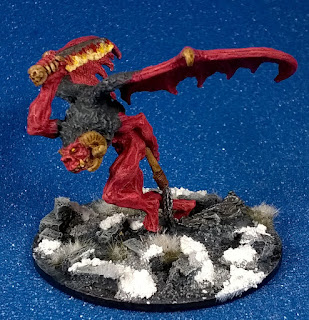 I have been considering various different options for the base terrain for Frostgrave. Initially I was going to use some textured wallpaper glued to MDF boards. I now have two different rolls of textured wallpaper and neither are quite right. I then saw a post showing buildings made from 6mm XPS under-floor heating insulation boards. These boards are made from the ubiquitous "blue foam" extruded polystyrene (hence XPS) and are available from an array of sources including Amazon, Ebay and a variety of online retailers. I have seen them as low as £3.50 for a 600mm x 1200mm sheet. They are also available in differing thicknesses as well, so you can get 6mm, 8mm and 10mm.

I picked up two for less than £10 from an ebay retailer and they arrived very quickly, with free shipping as well, which was nice. I cut the boards into 30cm squares using a long ruler and a Stanley knife with a fresh blade. The foam will quickly blunt the blade on your knife, so as soon as you see it dragging or tearing the foam instead of slicing, it's time to swap blades. I have no idea how such of soft material blunts the blade so quickly, but it does.

The sheets were advertised as 600mm x 1200mm, but they were ever-so slightly larger, probably about 610mm by 1260mm, so I had to trim the edges slightly. I used a set-square and a long ruler to make sure the cuts were all at right angles and switched to 30cm non-slip ruler and a standard craft knife once the long cuts were done. It's important to try and keep the knife vertical whilst making the cuts, or the tiles won't line up evenly after you have cut them.

The two sheets gave me 16 30cm x 30 cm tiles, enough for a roughly 4ft x 4ft grid. I'm intending to try Frostgrave on a 3ft x 3ft board first and see if it's the right size. Two of the tiles included areas that were damaged in transit, so I relegated those to test pieces. That means I have enough tiles for a 3ft x 4ft board at the moment, with two spare "good" tiles and two "bad" tiles. 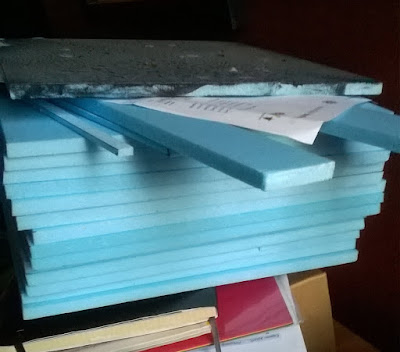 The plan is to affix the foam tiles to 30cm square 6mm MDF tiles which I had cut from a larger 1220mm x 606mm sheet by my local hardware store (B&Q for those in the UK - if you buy your wood from them they will cut it for you free of charge in many stores). The plan is to add the EVA tiles to the MDF to strengthen them and add a bit of weight to stop them sliding around. I'm tentatively thinking of some way to join all the squares together to avoid moving everything around whilst they are in play, but haven't go very far with the concept. At the moment it's either going to be a collapsible framework or possibly just velcro strips and dots on the undersides. 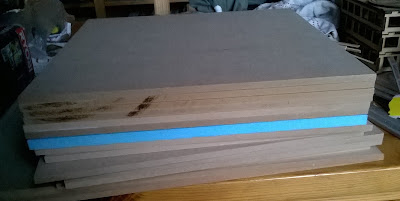 I have used one of the "bad" tiles to test a number of possible finishes. One of the advantages of XPS foam is that it is strong and dense and can be carved and scribed without crumbling into the little balls that the more common expanded polystyrene (EPS) suffers from. It does have the same drawback that it reacts badly to solvents and many aerosol propellants. Spraying EPS or XPS with rattlecans will cause the surface to melt and shrink and give off stinky fumes. So, hand painting or airbrush is the way to go.

I textured the board in a variety of ways (see below), then painted with some cheap craft acrylics from The Works. I used a dark blue-grey for the base, then a cool grey for a heavy mid-tone drybrush. The final highlights were made using a light drybrush of an ivory/off white. The image below shows the various finishes. 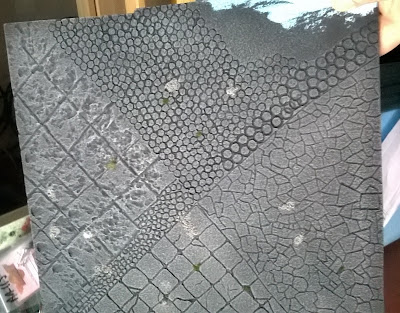 Area 1 is comprised of "crazy paving". This is simply a pattern of random shapes drawn into the foam using a ballpoint pen. It crushes the foam and leave s a nice seam between the slabs. Some areas were "scribbled" on to mimic the depression left behind by a missing stone.

Area 2 uses a rough 1 inch grid to represent more regular flagstones. I lightly drew a grid on in pencil then used the ballpoint to draw around each flagstone. Drawing round each one, rather than just drawing a grid, gives a more natural feel to the flagstones, and rounds off the corners slightly. Cracks and missing pieces were added randomly.

Area 3 is comprised of small cobbles or bricks drawn by hand. small O's abd C's are drawn into the foam using the ballpoint pen, so they abut one another. This is a very time consuming process and there is a tendency for the foam to tear if you aren't careful.

Area 4 is perhaps the most interesting. This has been created by pressing the rough end of a broken piece of rock into the foam (actually two pieces of rock, a sample of granite and basalt from my OU geology sample set). The random texture of the rock creates a very realistic rock-like effect (which is probably to be expected since I'm using a rock to simulate rock). The gaps between the slabs were created using the sharp edge of the rock samples, and aren't as defined as I'd like.

Area 5 is cobblestones created using a pen cap and the eraser cap from a propelling pencil. In both cases they were simply pressed into the foam to create an overlapping pattern. I have also seen an example of cobblestones created this way using a rectangular shape made from reshaping some brass tube. There is still a bit of space on the sheet, so I may see if I can find a suitable tube to try this out with.These methods have the advantage of being fairly quick, but the results seem to be much less controllable than the other methods. The pen cap is far too large, but the eraser cap from the propelling pencil looks OK.

I have also tried a 6th technique on the other "bad" piece, which is to scrunch up a ball of tinfoil and roll this around on the surface, pressing it in. This leave a random texture similar to the stone but is MUCH quicker and easier to do. This sheet is in the process of being painted right now, but I'll add it once complete.

So, which option do you think looks best? I'm torn between the cobblestones and the rock-effect slabs. I may actually mix it up, and add in some designs to the slabs, so I can mix the techniques up a bit. I also think a variety of styles will make the frozen city much more interesting. Let me knw your thoughts in the comments below.

Looks fantastic. If I had to pick one, I'd say area two is the best.

Perhaps affix some neodymium magnets into the sides?

Perhaps affix some neodymium magnets into the sides?

This is great, outstanding ingenuity...area 4 or 5 for me...well done, and I am literally minutes away from stealing your idea, lol...thanks.