Reclaimed mechs and spruced up Protolene

A while ago I put up some WIP pictures of a couple of GZG 25mm Landmate figures that I was trying to rescue. I had done some light conversion on them and scratch built some new guns out of Greenstuff and left-over barrels from my Old Crow NKDF Sabre tanks.

Yesterday, whilst painting 125 15mm WW2 US infantry on a production line, I broke up the tedium by having a crack at repainting these mechs.

I wanted to go for quite a bold paint job, as I've got a lot of grey or green or grey and green stuff, and I wanted these to really stand out on the battlefield.

They'd already been base coated with GW Skull White, so i gave them a coat of GW foundation paints Iyanden Darksun, with a khermi brown disruptive camo pattern. I then edged the camo patterns in black. The engines were painted with Codex grey and then dry brushed with Chainmail and then boltgun. Weapons were codex grey with Chainmail accents. The missile pods, eyes and sensors were Gore red over a Mechrite red base. The whole thing then got a Griffon Sepia wash, with Badab Black on the guns and engines.

I based them using a mixture of Windsor and Newton Medium texture medium (the medium medium - heh) and W&N Dark Sienna acrylic paint. Over this I added flock, cork boulders and a few tufts of Silfor static grass clumps. 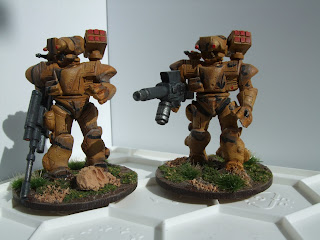 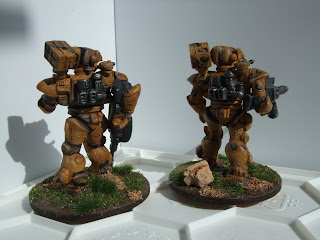 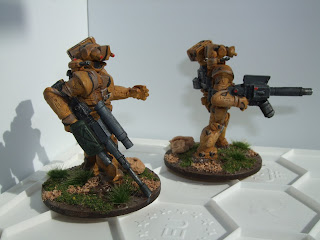 My lightbox is still out of commission and these were done in direct dayligh﻿, so apologies for the shadows.

I also posted a picture of my Protolene battlesuit ages ago and lamented that my protolene space pirates were all brightly coloured. I've added a splash of colour to the mech with some red detailing, as you can see here: 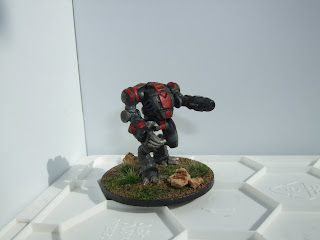 Nothing fancy, really, Mechrite red with Red gore on top. Jazzes him up quite nicely, I think.
Posted by GJD at 14:27

Good looking stuff; is the power fist on the Protelen walker a ctock part or did you convert that?

It's a standard part. When I bought it they only sold one set of arms per suit, so I bought one suit with the claws and one with the plasma guns, but now you get all the arms with each suit. Take a look:

I have posted a link to these and your earlier Blog post on my Blog.

For details check out
http://dampfpanzerwagon.blogspot.co.uk/2013/02/flash-gordon-in-power-suit-update.html

Regards and thank you for the information.