A second lot of kitbashes today.

Firstly, a simple addition to the excellent Sabre Class Dropship by the supremely talented Mr. John Bear Ross. I love the Sabre, both the dropship and gunship versions. When no one is looking, I like to fly mine around the room making "neeeeeeeeooooow! vwoosh! dakka-dakka-dakka!" noises.

There is only one small problem with it, when landed it rests on it's chin mounted Gatling cannon. There are 4 pads at the corners of the pod section, but they don't quite reach the ground. I can imagine the pads from the pod extending, or the dropship hovering and dropping the pod, but I wanted to be able to depict it landed on the ground.

I had some styrene strip lying around, and came up with this:

I think it adds to the model in a complimentary way, and reminds me a bit of the choppers in Avatar as well.

The second kitbash is an attempt to reclaim some figures that have been languishing in my lead mountain for about 10 years. They are old 25mm GZG Landmate Suits which I don't think are in production any more. There are lots of more modern figure designs for amazing mecha from CMG, Rebel, DP9, Zandriz IV, ArtCrime and many others, and these look very dated in comparison.

To be fair, they aren't great figures. The detail is sketchy at best and they actually look nothing like the Landmates from Appleseed that thy are supposed to be, but at the time they were all that was available. I've decided to try and re-purpose them for 15mm as early versions of mecha instead, 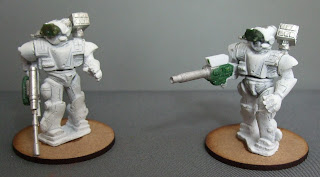 Both figures have had 6mm MRLS packs added to their left shoulders as missile packs, and small 6mm Gatling turrets to their right shoulders as a form of CIDS (close in defence system, like Trophy or a tiny CIWS). They have had a couple of spare bits from a VOTOMS kit glued to the front of the helmet as a sensor cluster and the guns have been cut down and re-built with Greens Stuff, styrene strip and spare barrels from some Old Crow vehicles.
I think the make or break will be the paint job on these guys. Without hacking them to pieces or going mad with the Green Stuff - which I'm not much good at - this is about as good as they'll get for now. I may add another sensor of some kind to the front of the helmet and possibly add some sort of backpack.
Posted by GJD at 01:54

Vereh nice work on the skids.