I'm building up a collection of 28mm terrain for some Dark Ages/Age of Arthur gaming, using either Dux Brittanium or Dux Bellorum. As part of this I decided to make up some wattle style fences. Rendera make a nice set in plastic, which I became aware of after I had made my own...

The construction was fairly simple. I started with a 2 meter length of semi-round wood trim, about 18mm wide and 5 mm high at the peak. I had originally bought this as a base for 15mm bocage, but never got round to using it and it had been snapped this into short lengths to get it into a storage box. I started by sawing off the snapped off ends and sanding down the corners. 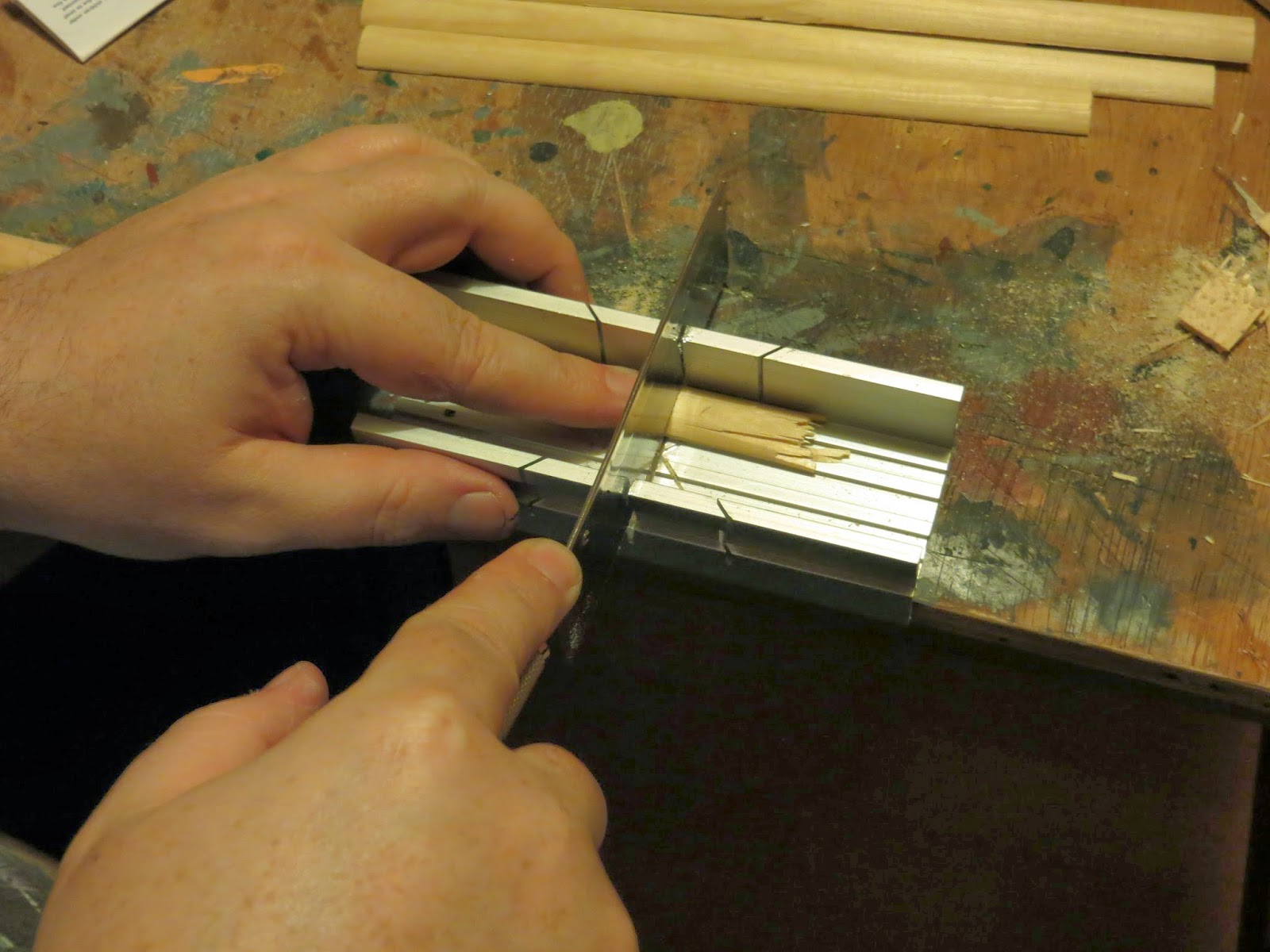 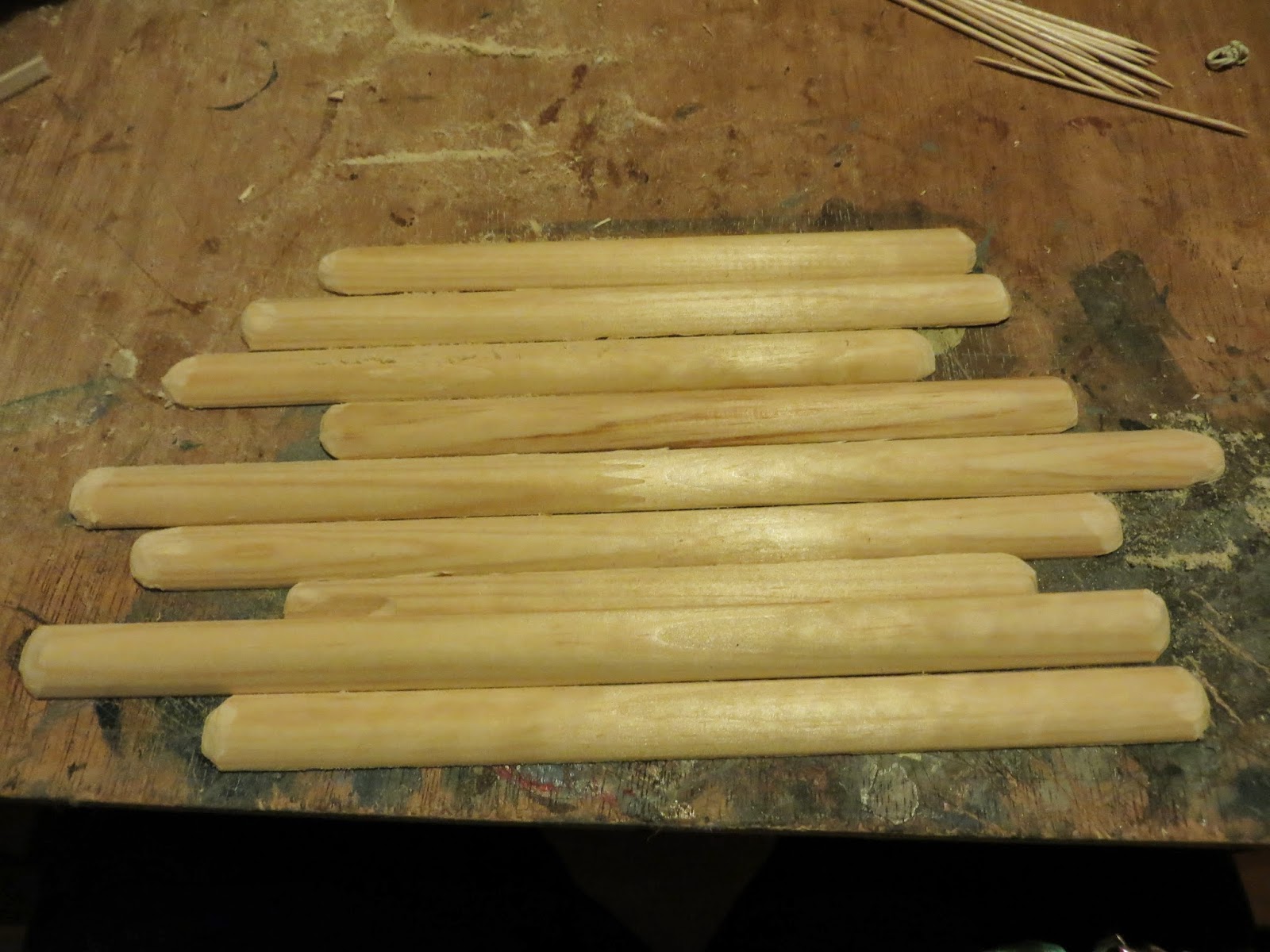 I then drilled 2 mm holes along the length of the strips, at semi regular intervals. I varied the distance between them, as I'm thinking the dark ages farmers didn't measure the distances between uprights with any great accuracy. 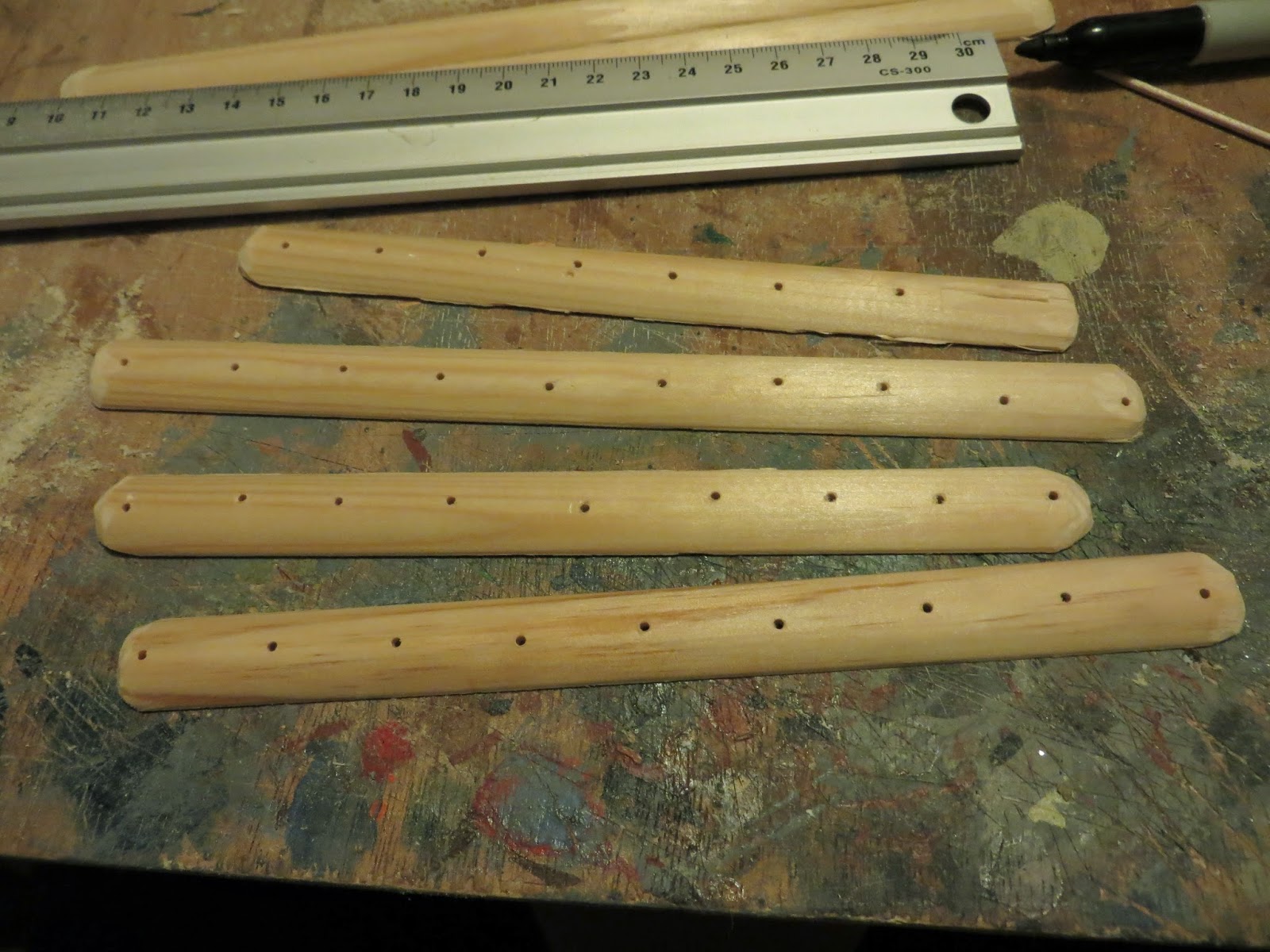 I then put a blob of super-glue over each hole and inserted a cocktail stick, rotating it as I inserted it to spread the glue around. 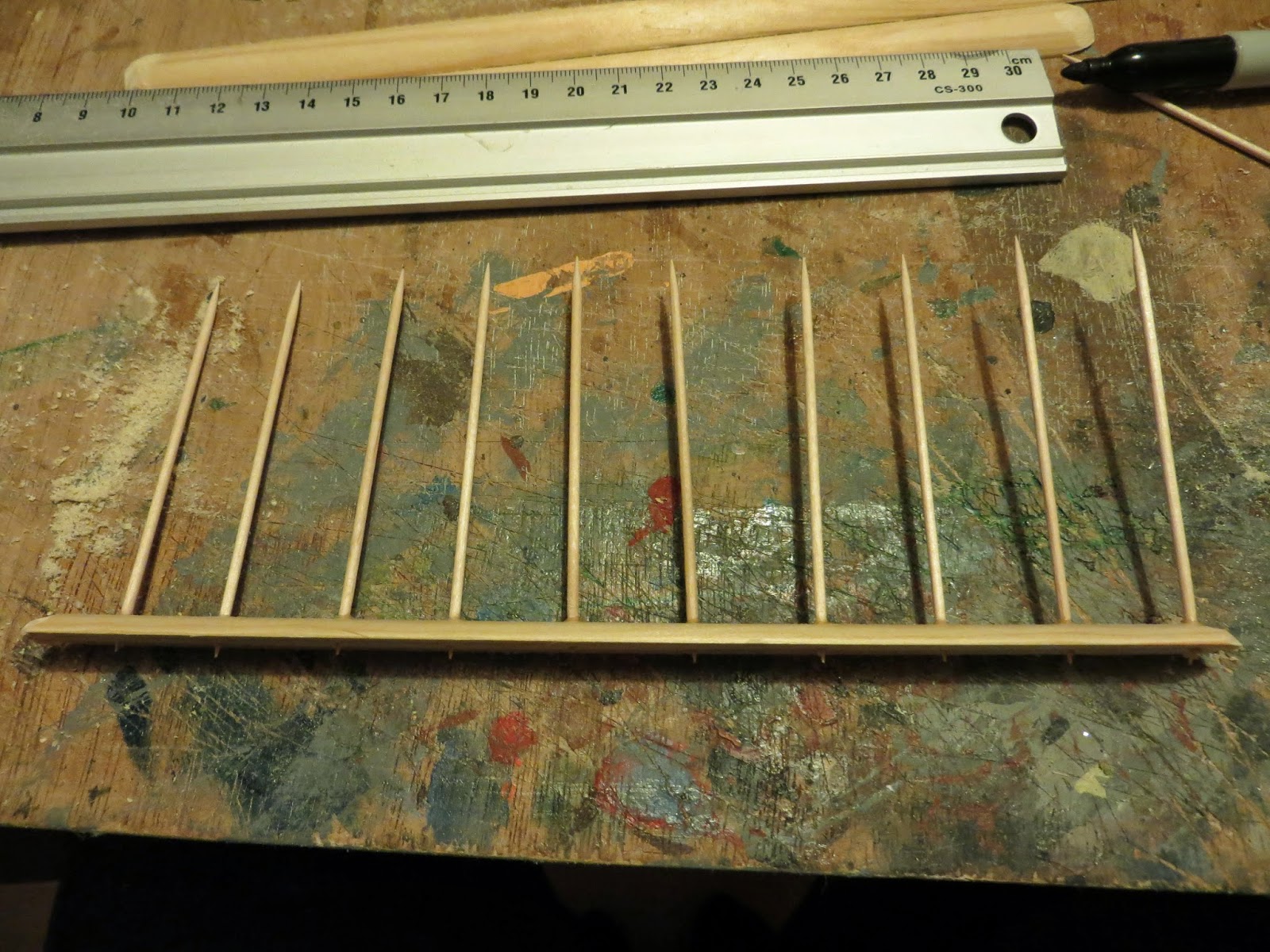 Which gave me a veritable forest of spikes. 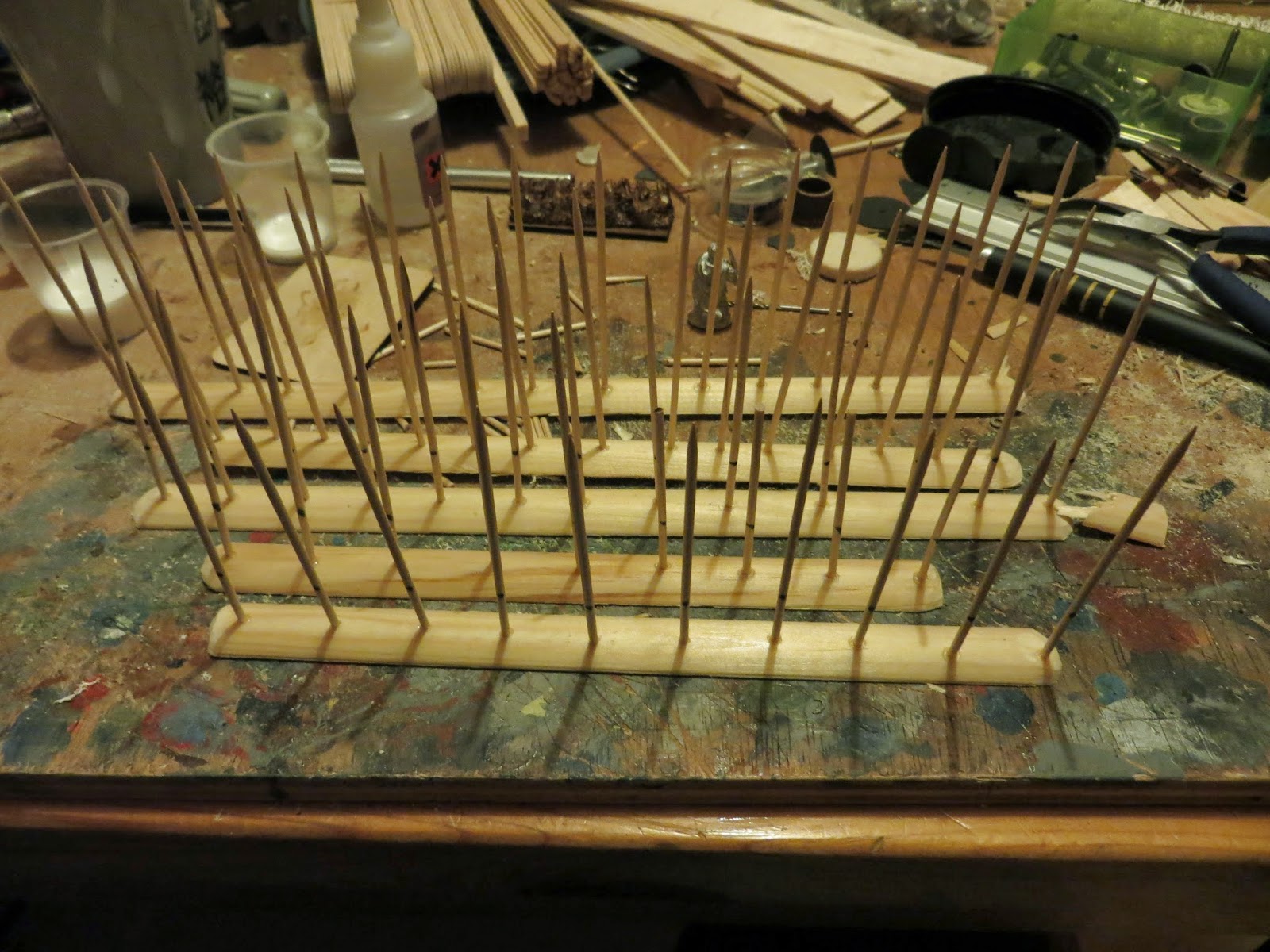 These were left to dry thoroughly. You may need to trim the underside if the point of the cocktail stick has protruded all the way through. They can easily be sanded off or cut with a sharp craft knife or scalpel. I then marked off  a line where the top of the fence will be, using a 28mm figure as reference and remembering to take into account the added base thickness that there will be on painted troops. I picked about chest high, just the right height for two dark ages farmers to lean on to discuss the details of turnip farming and pig husbandry. 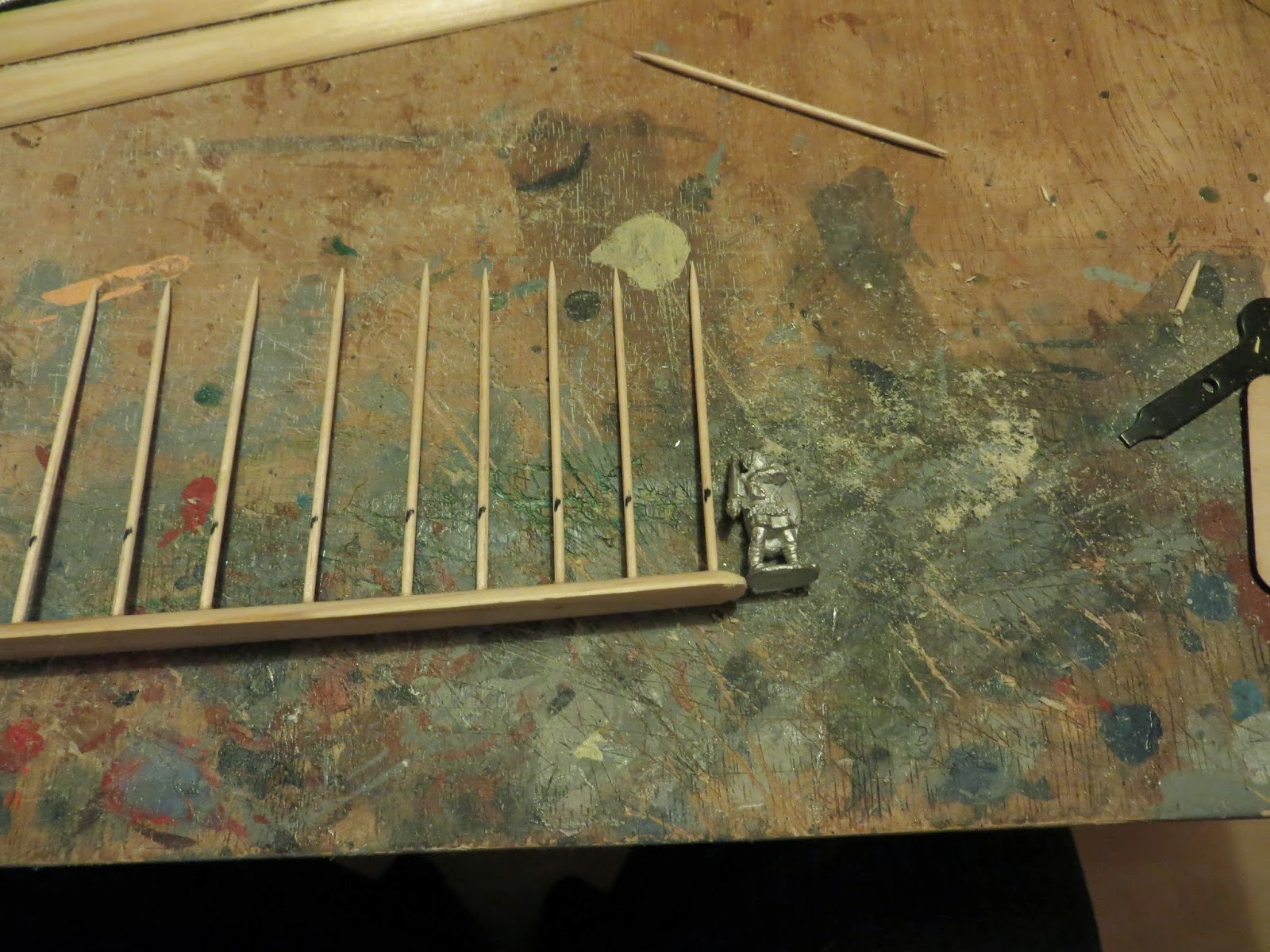 I then Sellotaped the tops of the cocktail sticks together. This avoids them pinging across the room like tiny missiles when you clip them off using side cutters. I also tried Dremeling them off using a cutting disk, but it's just as quick to use side cutters. Cutting them this way is quick, but leave the tops slightly flattened. A quick squeeze in the other direction evens them out and give a quite nice roughly cut timber effect. 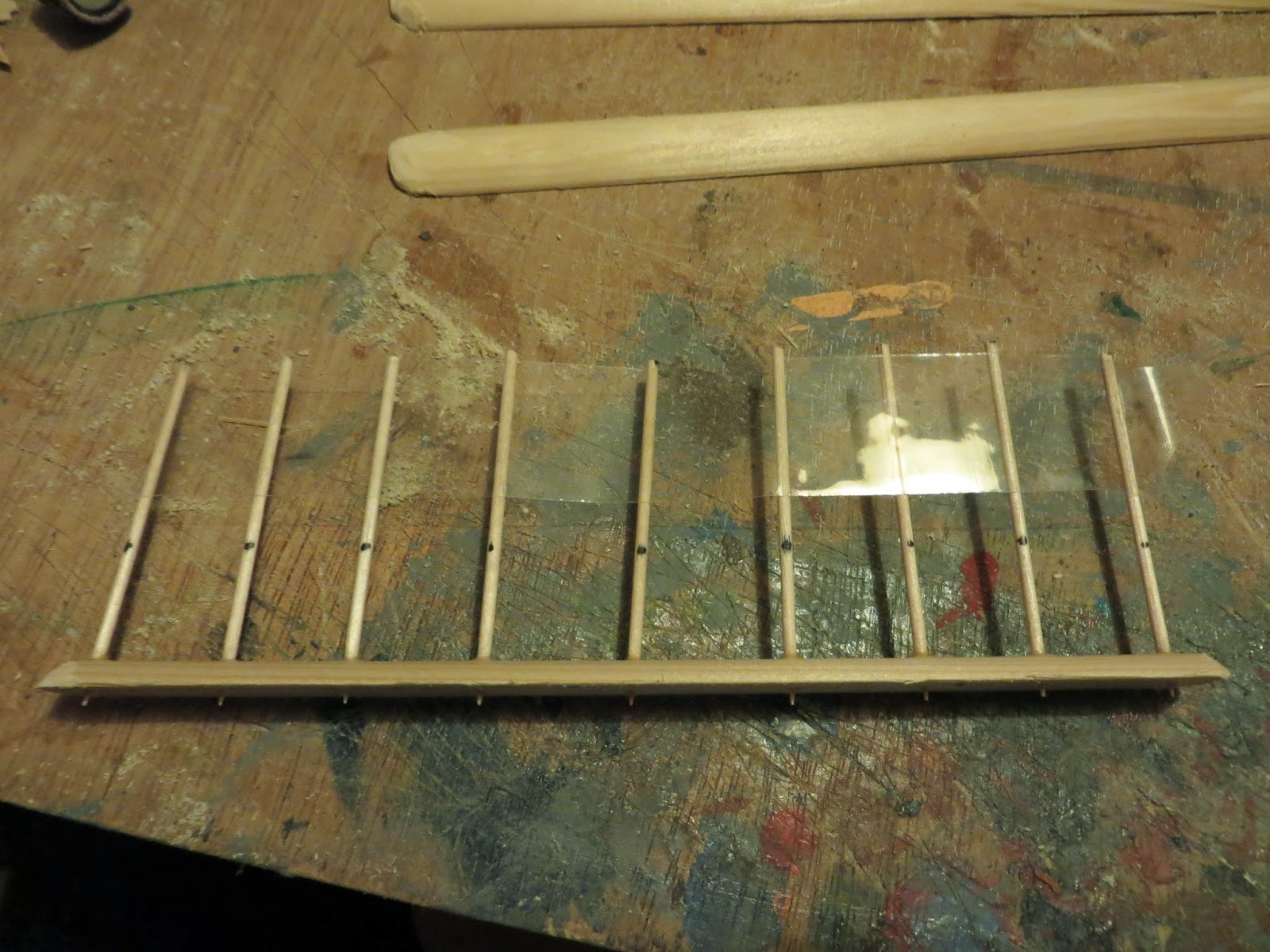 I then painted the uprights in Burnt Umber (dark brown) and the base in Burnt Sienna (reddish-brown - GW Bestial Brown is very similar). I left the tops of the uprights unpainted to look like the fresh cut wood inside the bark. The base got a liberal coating of PVA followed by Woodland Scenics Medium Brown Ballast and then Woodland Scenics Medium green flock in patches. The whole thing was then left overnight to dry. 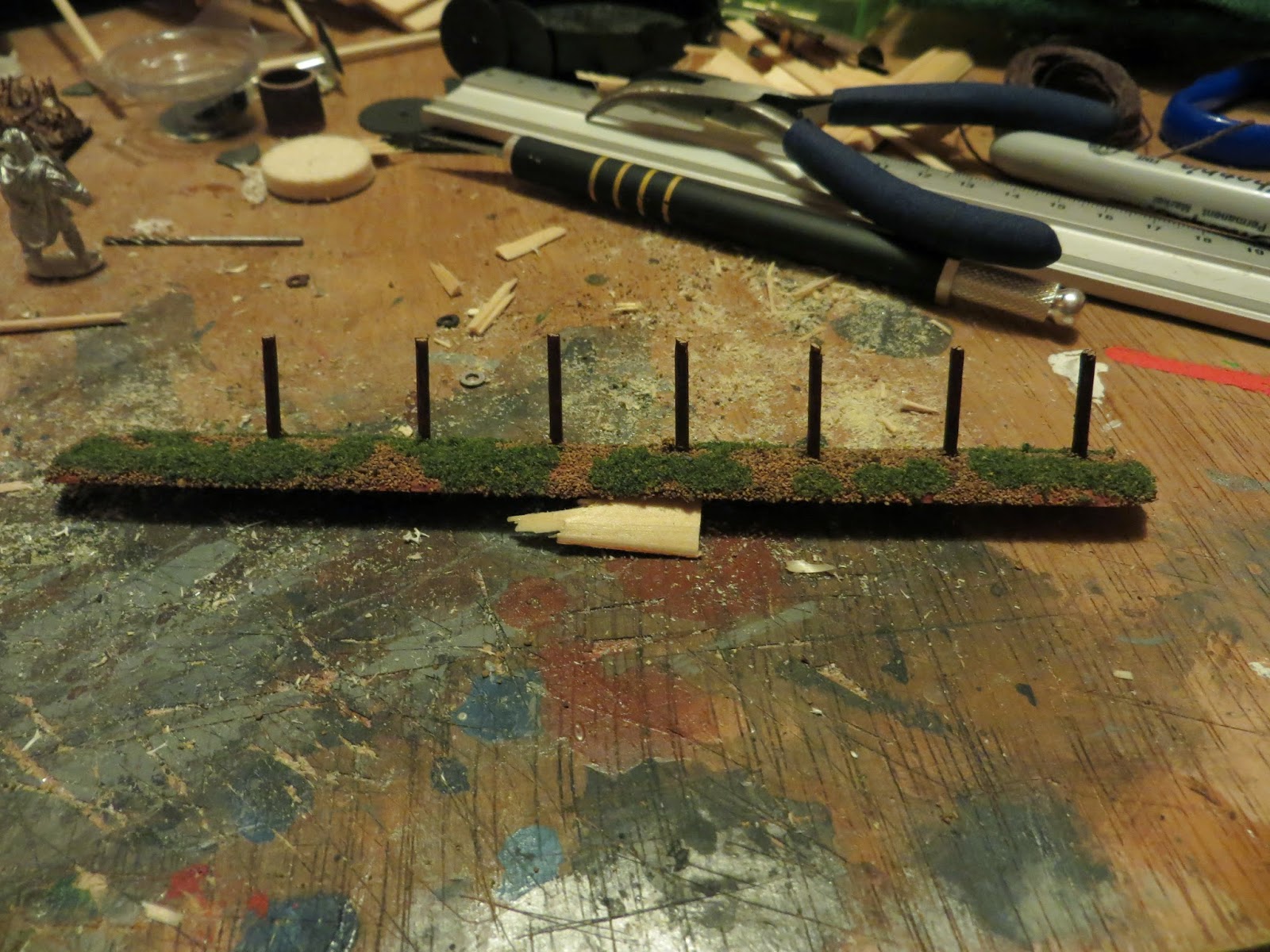 The next day I started to add the wattle to the fences. Wattle is typically made of branches woven between the uprights, either split or whole. I had already experimented with various materials for the wattle itself, including green garden wire, beading wire (which does make great barbed wire, though) and garden twine soaked in PVA, none of which really gave me the effect I wanted.. I had seen a recommendation for thin leather cord on another site and whilst browsing for it at Hobbycraft saw some waxed cotton thread in dark brown. At £3 for 22 meters, I thought this was a bargain, and seemed to be exactly what I was looking for. 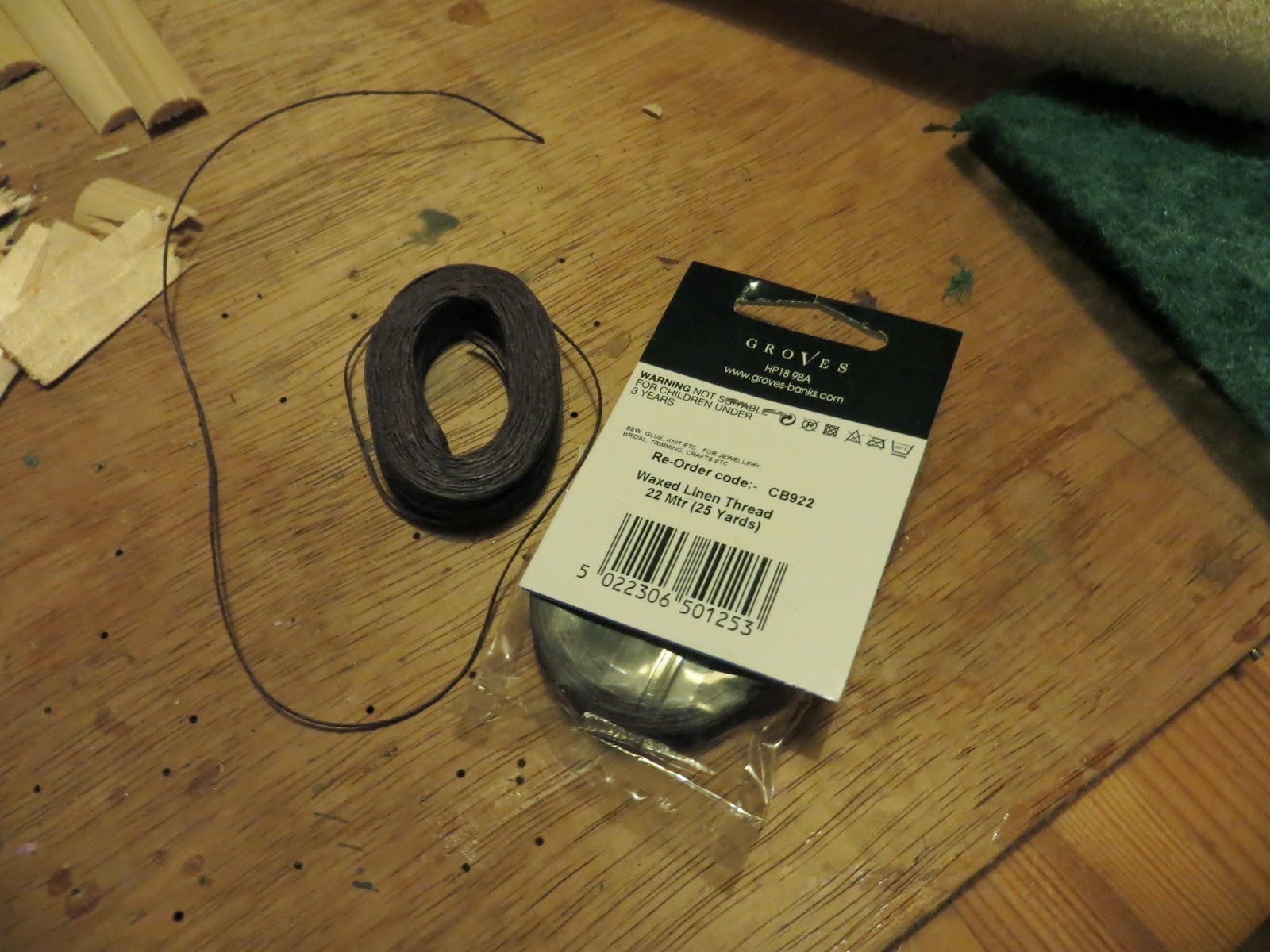 I tied the end to one of the uprights and then wove the cord between them, passing on alternate sides as I went. Occasionally I had to stop and push the cord down, as it had a tendency to creep up the uprights. Once I got close to the top I tied off the cord again, and secured it with a dab of super-glue to stop it unravelling. The picture below was on my test piece, which I hadn't painted or flocked at this stage, but the method is the same. 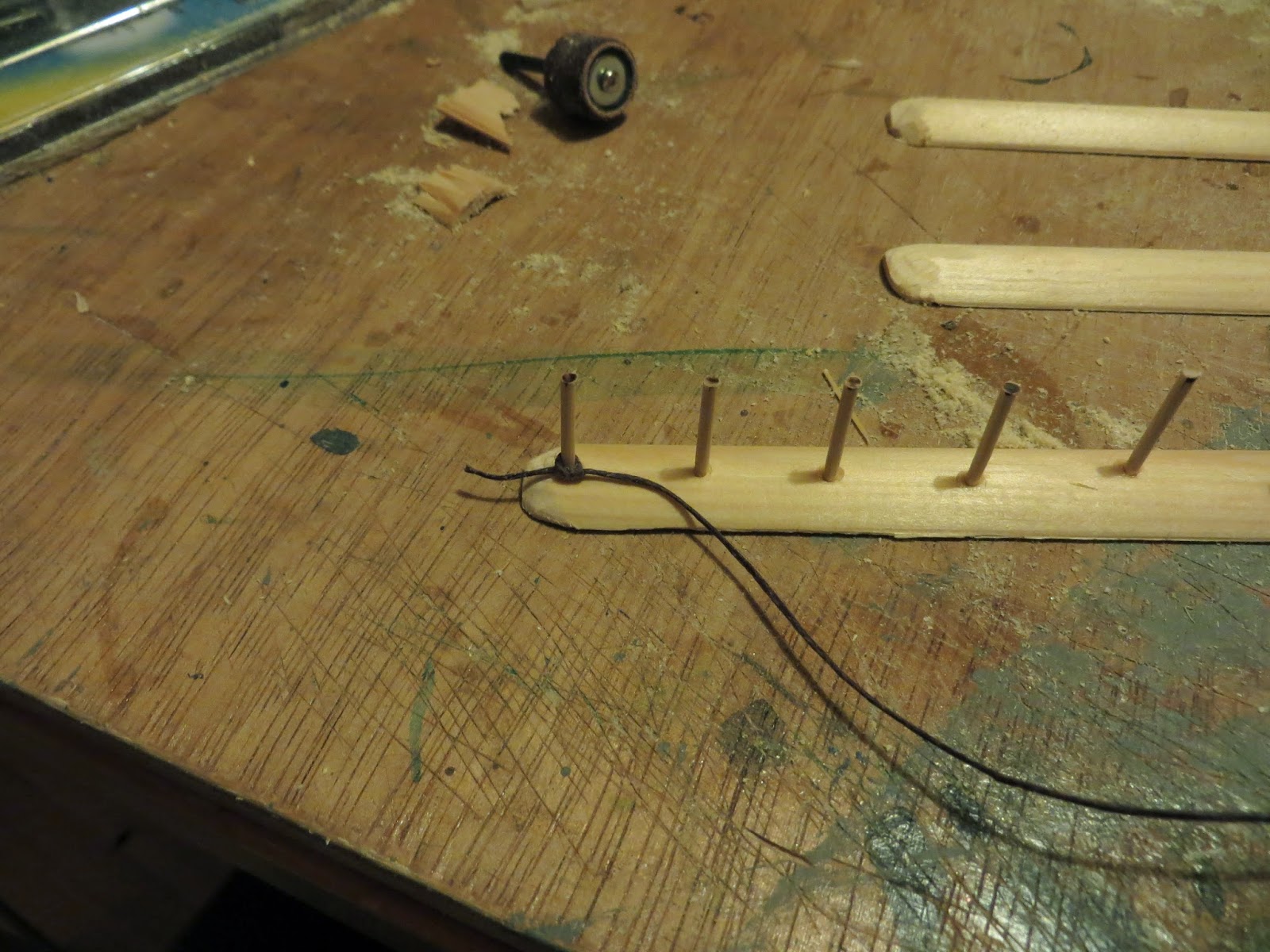 The end result was quite pleasing. I managed to get about 5 or 6 feet of fence from each spool of waxed cotton. They need a misting of watered down PVA from my garden sprayer to fix the flock and ballast in place, and I may experiment with a light drybrush on the cord to bring out the detail, but even as they are I think they look pretty good. I may now go back and re-do a livestock enclosure that I had previously done in garden twine soaked in PVA, replacing that with the waxed cotton. 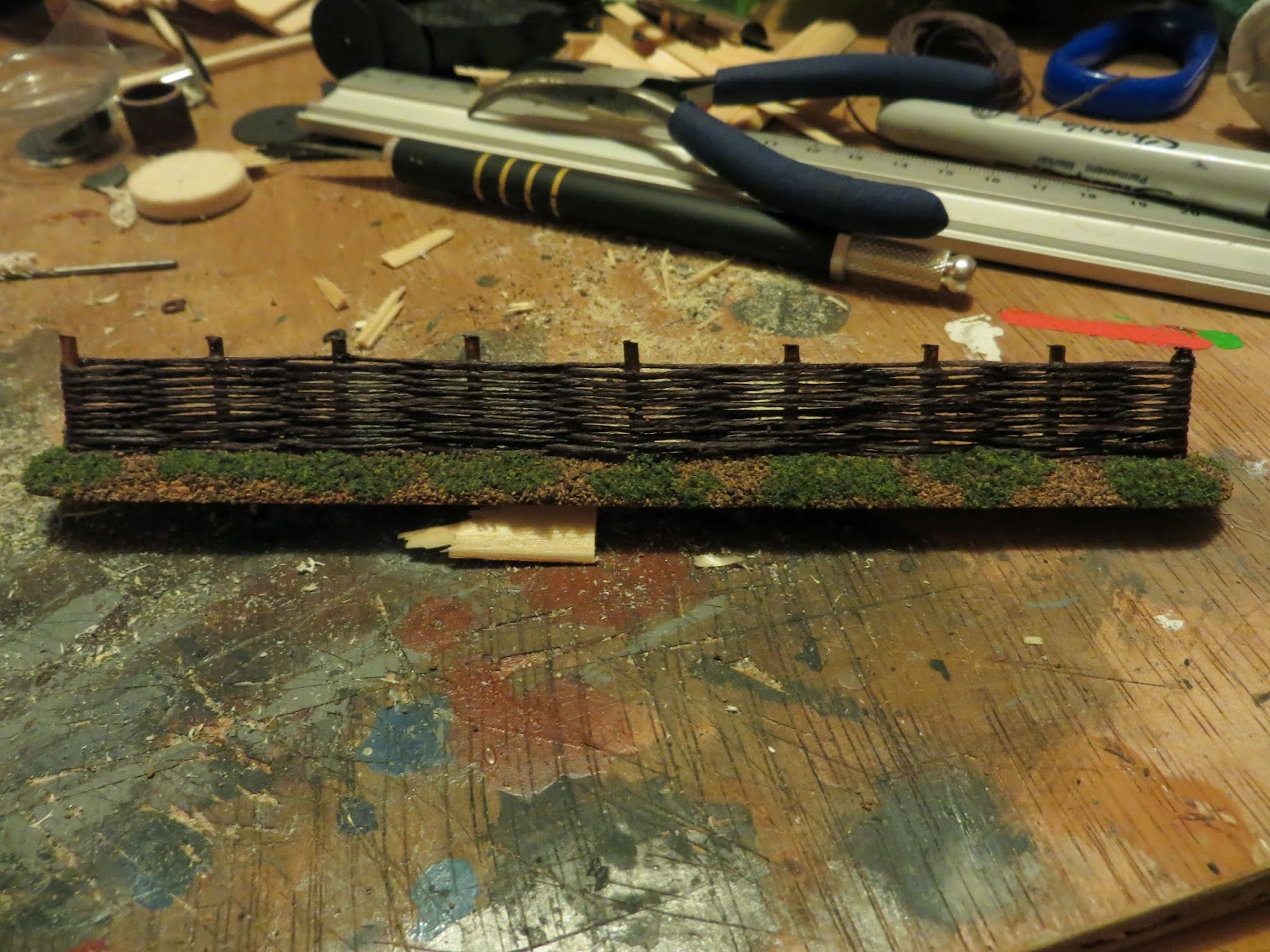 Overall I'm pretty pleased with them. Including painting I managed to get all of the fences completed in two evenings work. The most arduous part is winding the thread around the uprights, which can get quite dull, but the end results are well worth it. I even managed to use my Dremel as a drill without drilling any more holes in the dining room table.
Posted by GJD at 13:09

Excellent work on these, will have to give them a go

Hmm... these would look good on the "sheep" hexes of that 3-D "Settlers of Catan" board I was thinkning about ;)

They look pretty cool, nice one!!!

They look pretty darn good! Have to try this too to get some walls to use in Saga

Looking simple and great...thanks for this tuto!

They look fantastic! I was looking at some 4Ground fencing... but I may attempt this instead - they look wonderful! Thanks for the excellent primer!